On the 13th December, Scandinavian countries and Italy celebrate Santa Lucia (Saint Lucy), a Christian martyr, who would bring food to people hiding in the catacombs wearing a candle-lit wreath on her head to guide her. Girls in Sweden and Finland celebrate this day baking biscuits, and dressing up with a white gown and the candle-lit wreath. Kids in Italy celebrate this day very differently. To them, St. Lucy is a blind woman, who travels on a donkey and brings sweets to the well-behaved kids. She’s like a less marketed and less sexist version of Santa Claus.

In my family, the tale described her bringing small gifts to be found in the morning and throwing sweets through the ceiling on the 12th evening. Being herself blind, this meant the sweets would be flying in all directions. Imagine hard sugar sweets landing on the wooden floor making a loud banging noise, like firecrackers going off in your living room. No wonder I was petrified of this event when I was two years old! I’d curl up on my dad’s lap and cry my eyes out until it stopped or I fell asleep. My then 6-year-old brother, on the other hand, was having the time of his life, running around the house collecting double ratio of sweets. Then, just before going to bed, we’d leave some milk and biscuits for St. Lucia and a carrot for the donkey. In the morning, the mug would have crumbles of biscuits floating in the half drunk milk and the carrot would have been all munched on.

The biscuits we laid out were usually store-bought, and not that good. There was no lemon zest, no powdered sugar sprinkled on top, no homemade taste or look. They were all perfectly cut stars, trees or baubles shaped, with no personality. These biscuits (similar to shortbread) are probably one of the first things I learnt to bake. This year I’ve followed a different recipe (there a literally hundreds of them available online) and had to improvise as I ran out of ingredients half way through.

The recipe I followed comes from here, but since the link is in Italian, I’ve translated it for you and added my variations in brackets:

I made sure the butter was at room temperature, then I mixed it with the egg, before adding the flour, the pinch of salt, the vanilla, and the lemon zest. Once the dough was of a firm consistency, I wrapped it up in a ball with cling film and put it in the fridge. The intention was to leave it for at least 30 min. I had to leave it in for a day as work got in the way. When I unwrapped the dough it was a mess. I laid it between two sheets of baking paper to roll it out, but the whole dough was very sticky and clearly didn’t have enough flour for the amount of butter in it. So I had to kneed it again in a bowl, and this time, because I was out of plain flour, I used coconut flour. I’ll be honest, I’m not sure how much of it I used, but it was about half a 500gr package. Then, finally, when the dough was no longer sticky, I wrapped in cling film again and waited an hour for it to cool in the fridge. This time it worked, and I was able to roll it out. I purposely kept it think because the biscuit tend to shrink when they cook and my cookie cutter shapes are not very big. I used trees, snowmen, stars and snowflakes to cut my shapes, place them on a baking tray and pop them in the oven for just 10-11 minutes at gas mark 7 or 165 degrees. I didn’t want them to get too dark, so as soon as the corners started getting golden I pulled them out. That insure the biscuits would remain soft and chewy at every bite. Contrary to the rule, I sprinkled powdered sugar on them while they were still warm. This is because the sugar I used comes with a sieve on the end of the tube and not much sugar comes out so it takes a while. Also, I prefer when the sugar blends in with the biscuit, rather then being an afterthought that can be dusted off.

Turns out, the coconut flour was an amazing addition, that added a twist to the more dry and plain flavour these biscuits normally have. It also compliments the lemon zest very well, bringing a fresher taste. 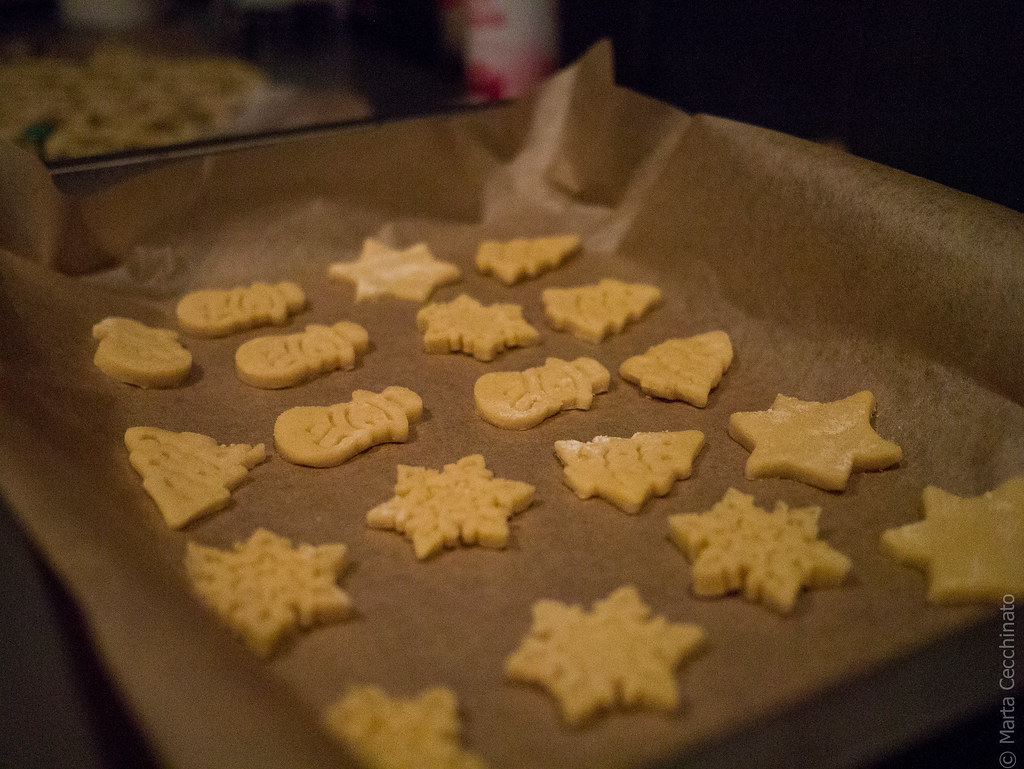 MY TALISMAN OF HAPPINESS is a self-discovery journey of how food can make us happy physically, mentally, and socially. Behind every post there is me, Marta, a researcher by day, and a blogger by night. Read more…